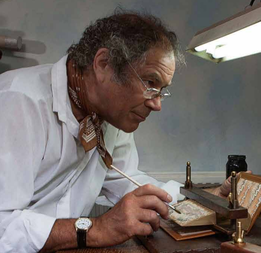 Fore-edge painter Martin Frost has been working from studios in West Sussex, England for 40 years. He has painted the edges of well over 3500 books including examples of the scarce all-edge, split and two-way doubles and now binds many of his books too. He has written a workshop manual, published articles and lectured to many major organisations interested in the art and craft of the Book. He has appeared throughout the UK, Canada and the US from Boston to Atlanta, Chicago and throughout California. Recently he lectured at the 2015 Convention of the Society of Bookbinders at Keele University.  His work is to be found in many national and international institute and private collections. In 2016 he will be offering a limited schedule of workshop opportunities in the UK and New York


Career Highlights and Achievements
He has been awarded 'Maker of the Year 2017’ by the British HERITAGE CRAFTS ASSOCIATION for practicing and promoting the rare art of Fore Edge Painting which is now designated as  ‘highly endangered’  The One Show on BBC tv recently broadcast a feature on his works and he has appeared in many magazines including a recent two page spread in Country Life.

Inspirations
Martin Frost is the last commercial fore-edge painter capable of this sorcery. Although the real magic lies in his ability to render his subjects in painstaking miniature. His roots are in working on a larger canvas—he was painting the scenery at Glyndebourne when he realised the possibilities of working on a smaller scale.