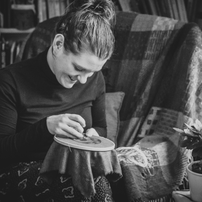 Hanny is passionate about hand embroidery and the many exciting possibilities this art form holds for use in contemporary art. She aims to champion traditional stitch techniques such as goldwork and whitework whilst pushing the boundaries of how hand embroidery is used.  She is a graduate of the Royal School of Needlework (FDA Hand Embroidery 2013) and Falmouth University (BA Contemporary Crafts 2014). Her latest project is ‘Newton Bow Ties' an innovative line of bow ties hand embellished with goldwork embroidery.
​

Inspirations
My goldwork embroidery workshops are a balance of technique and experimentation – I like to leave plenty of ‘breathing space’ for students to find their own response to the historical techniques of goldwork. I teach the basics of techniques and a method of experimentation which allows students to find their own outcomes and feel they have more ownership over how they use the technique, and I have had a great response.
​website design and content ©simon & yvonne sonsino 2020