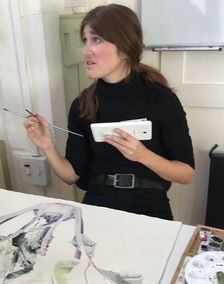 I am a botanical painter. When I paint plants I try to become them. There is a great deal of observation involved even before my brushes touch the paper. I believe that a good picture is made using not only sight, but also touch, sound, smell and movement. One has to be aware of all of these elements in order to portray the plant well and describe the space that the plant is growing into, both over and underground.

Career Highlights and AchievementsGuest Artist at the Moscow Watercolour Festival
20th – 22nd October 2017 DI Telegraph, Moscow, Russia
Worthing Artist Open House, UK 24th and 25th June 2017 1st and 2nd July 2017
Artist in Residence 17th – 29th June 2017 River Cottage HQ, UK
‘Leafscape’ 16th – 25th February 2017 Solo exhibition at Abbott and Holder, London, UK
May 2016: Live painting demonstration at the RHS Chelsea Flower Show.
The Incredible Exploding Pomegranate 15th July – 15th October 2015 Group exhibition in Granada, Spain
February 2015: Appearance on BBC4’s documentary ‘In Search of Rory McEwen‘.
In 2014 Inky Leaves was invited by the RHS to set up a pop-up studio at their RHS Botanical Art Show in London.
​
Inspirations
I trained in botany before committing myself fully to painting so that I would understand the processes of plants more comprehensively. Equipped with this scientific knowledge, I am now testing new approaches to my artwork to push the capacity for botanical illustration to bring greater awareness of plants and our interaction with them. I hope to inspire people to think beyond their experience whilst enriching our current perceptions of botanical illustration, its applications and how it sits within the larger scope of the visual arts