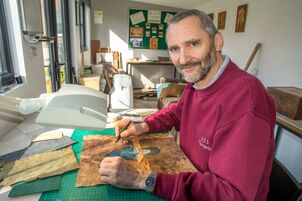 I am a self-employed artist making marquetry commissions and teaching and demonstrating marquetry. I have been making marquetry for over 30 years and have been self-employed for the last nine. I have taught at prestigious venues including the Hepworth Gallery in Wakefield, Denman and Harewood House. I believe that course participants should firstly enjoy themselves. If they also successfully create a piece of marquetry then that is a bonus!

I have demonstrated Marquetry several times on the Hochanda craft TV channel and regularly at the NEC Birmingham. I am the founder of the Staffordshire Marquetry Group and from 2011 to 2017 was the President of the Marquetry Society. I have written various articles for the Society’s quarterly magazine “The Marquetarian” and have had three articles published in “Furniture and Cabinet-Making” magazine.  I am eligible to exhibit in the “premier” class at the Marquetry Society’s annual exhibitions and have received numerous awards for pictorial work, applied work, miniatures and portraiture.

I admire the precision of MC Escher and the use of block colours by Jack Vettriano. Both of these attributes apply well to marquetry.  I mostly work from photographs which are often, in the case of commission pieces, supplied by my clients.

I play bowls during the Summer and occasionally inflict my guitar-playing on the audience at the Eccleshall acoustic music nights.