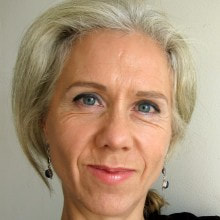 Rosalind Wates is a mosaic artist working in a variety of styles, materials and techniques. She works mainly on commission for private clients, public bodies, arts organisations, and schools and communities. As well as the various town and city centres up and down Britain that play host to her work, her clients include a number of well-known public figures. Her projects range from small exhibition pieces to larger work: mosaic floors, swimming pools, and mosaic sculptures for public areas. She uses glass, ceramic, marble, slate, gold and natural stone and often employs a workforce on larger projects.
Mosaic is a distinctive medium; it's not a substitute for painting or other mediums and when treated as such it loses impact. A mosaic gains much of its energy from the flow and direction of the tesserae - the andamento - which can vividly express that which is felt but unseen: the living energies that make up and surround the things of this world. The scale of the tesserae is also important: larger pieces might be chosen to give emphasis, or smaller pieces to make an area recede. By such tools as these are the dynamics of a mosaic controlled: mood, emphasis, emotion, composition, and movement.

Career Highlights and Achievements
During her 25-year mosaic-making career she has written for magazines, given lectures, taken part in television and radio programmes, and produced a book on mosaic design. ​As well as the various town centres up and down Britain that play host to her work, her clients include Michael and Shakira Caine, Jeremy Irons, Cameron Mackintosh, and Lloyds Bank.

Inspirations
Rosalind’s work has been influenced by the natural world she finds herself in, sometimes employing found materials to create mosaics. The other strong influence is the work of her uncle, the late artist Patrick Heron. Brought up surrounded by his abstract expressionist paintings, colour has always played an important role in her work.
​website design and content ©simon & yvonne sonsino 2020