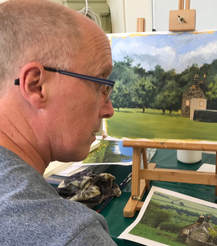 Jonathan Newey is an award winning artist and has been teaching in adult education for over twenty years. He is experienced in a number of mediums including watercolour, acrylic, oil, pencil and resin and has been a demonstrator for Derwent, Karisma, and the UK Coloured Pencil Society of which he is a founder member and signature artist. Jonathan has exhibited at various prestigious venues including West of England Academy, Royal Society of Birmingham Artists, The Mall Galleries, London and the affordable Art Fair, Battersea.
Examples of his work can be found on his website:
www.jonathannewey.com
​

Inspirations
I am inspired by nature in various forms such as light, colour, texture, landscape, wildlife and space. Inspiration comes from ideas and sketches gained by looking at books, magazines, painting outside and also the work of other artists such as the French Impressionists and the abstract impressionists of the middle to late twentieth century.